For the Membership, not a Few Toms and Iains

A few things to think about in the queues for the Labour Party conference in Brighton, in September 2017, including why Tom Watson’s speech felt like the end of something Nick Clegg started…

Remember the Mr Nice Guy, “I agree with Nick”, no-to-tuition-fees General Election? A mere seven years ago? And the nationwide holding-of-the-breath while Nick Clegg flirted around in the space between the close-hung Labour and Tory votes-and-seats results?

Remember the nationwide sinking of hearts as Clegg plumped for a deal with Tory Dave, and the resulting cry of rage and disbelief when he dropped his ‘no tuition fees’ line?

That was the opening of a seven-year run of general exasperation with dishonest, PR-led, opportunist MPs and so-called journalists and celebrities who dance to the tune of the billionaire media owners day after tedious day, surfing neurotically on a wave of confidence that people won’t remember an opposite line taken a week or so before. Let’s close the brackets on them and move on.

The tide began to turn when Jeremy Corbyn appeared in the leadership candidates line up for Labour. For most people, it was instantly clear what they were looking at – three PR robots and one honest man. For those who didn’t get it immediately, a bit of research into Corbyn’s career brought them back yelling with joy and hope. For the rest the truth became clear, as Westminster-bubble man, Guardian-woman and yuppie-woman trotted through their acts and Corbyn rose and rose in the polls, saying what we all knew was true day after day. This was so much more exhilarating than

struggling to find Clegg nicer than Cameron, or get excited about a choice between Miliband one or Miliband two. Faced with Corbyn v the robots, panicked Labour shiny people came out one after another to shout “we didn’t mean it! He’s not electable!”

Labour Party membership swelled, spent a year or so learning to do politics, then got locked into battle with the party Holdfasts. In Brighton in September 2017 there was a party conference such as hasn’t been seen for years, if ever. Shocked administrators and dizzied chairs tried to hold their line as member after member came up and vocalised an aspect of life as it is lived by most of us.

I talked to some fellow TU activists about the strange mix of euphoria and frustration we felt as the conference unfolded. We gazed at the right-wingers angsting about Brexit, and playing tricks to get the Mayor of London back on the menu. We cheered the people speaking up for our NHS, for our understaffed, underpaid emergency service workers, for all the people hounded out of their homes, deprived of social care… Yes, we’ll try and get our heads round Brexit, when you put your shoulders to the wheel to

save our NHS and our homes … But the battle isn’t won yet. If this had been a real conference, we said, then each of those 3-minute windows on the world the membership brought to the podium would have ended with a proposition and a vote, and with each vote, the Labour Party would have been more wholly in line with the real people of this country. But we have voted some real people onto the various committees that run the party. Next year, the Labour Party Conference will be real. 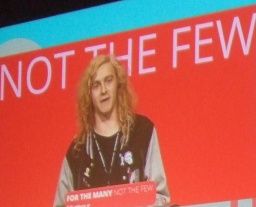 We were restive in receipt of Iain McNicol’s prodigal son speech and his ‘we have Progress, we have Momentum’ joke. We were appalled at the re-run of last year’s reference-back battle with the Chair but it was won this year, thanks to a vociferous membership, the guiding hand of Momentum and the fearless interventions of CLP officers, and we noted that when the same situation threatened a mere day later, we’d got the hang of it all.

We note that this is just the beginning of the final battle. Our advances have given membership a slender majority in the places where it counts, and we saw the horror in the faces of the Holdfasts as they realised how near they are being dragged to a situation where the clued up membership are truly in charge. Just think – membership might vote for anything. Palestine is back on the agenda, as is electoral reform, nationalisation of the services we rely on, NHS re-enstatement, fracking and universal credit. It’ll be Trident next. Yes, it will. Democracy is scary stuff, isn’t it. 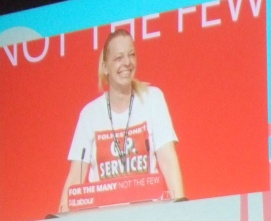 slot. Nothing against him really, but a principle was at stake. Most of the membership present wanted to hear from some of the other Mayors, or leaders from other regions. London is not Britain, we said. We were all restive again in receipt of Tom Watson’s prodigal son speech – I stayed in the hall for that one but like a lot of people, only because the Holdfasts had scheduled the day’s votes to come straight after it – but we’d all made friends with the people in the seats around us by then and we managed to enjoy ourselves. When Watson made his Momentum joke, the chap in front of me screeched “what did he say?” and I replied “he said ‘a bunch of Trots,’” and we all had a bit of a laugh. Tell your mates in the media Tom, we do not forget that quickly.

A Broad Church, and One Big…. Family 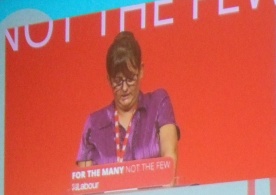 Tom, an apology might have helped you. I doubt Iain could swing it but, with a proper apology, you just might have got our attention – but you didn’t, so your new Corbynite tone is just so much Clegg-style PR. Bear in mind that we could have had a socialist Labour party in power by now. We could have won in 2017. We could have started on rescuing all the people who’ve been floored by failures in housing, in the NHS and social services, in education and in welfare. But they are suffering still, because you had the power to wrong-foot the election efforts, so we haven’t had time to think about your Brexit angst yet.

Billy Hayes explained it to us. the Labour Party was formed to be a voice for the workers and, uniquely among parties, should not have only one voice, because not all workers have the same politics. It takes someone with a heart the size of Corbyn’s to be a real Labour Party leader. “We are united now,” declared the all-loving, all-forgiving Jeremy, and we began to believe him.

Claudia Webb, speaking at a CLPD fringe meeting, appealed to us to think of the party as our family. Okay then, let’s do it this way: there are those who are greeted by cries of joy when they walk up the front path – Jeremy and John, Diane, Angela, Richard and Becky, and there are those who get a rolling of the eyes and a glancing at the clock – but they are family and, okay Claudia, we will let them in and even lend them a fiver in times of need but, without any apology forthcoming, Tom’s and Iain’s leaps over that fence were as frustrating as Nick Clegg’s leap into Tory arms seven years ago. 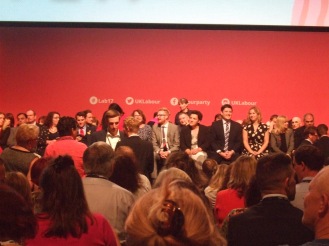 We have had enough of insincere, PR-driven career politics. We do not forget. Tom Watson may be forgiven in time, I doubt Iain McNicol will – but it is possible to move on. We have given notice to the Holdfasts. We have learned to do our own politics. Now, they need to learn to do democratic socialism or get off our train. The tone of all their big speeches suggested to me that most of them really would like to have a piece of it – or at least would like to be seen to be trying.

Keep an eye on them comrades – don’t slam the door in their faces, but it’s our party, and we have work to do. The Labour Party is for the many, not the few…