I’m so pleased that for the rest of my life there’s an extra element to the experience of listening to bird song. I can work on how the notes of a thrush might sound like the smell of cold tea with no sugar….

[Update, April 2019 Chris Packham is being harassed by fox-hunt lovers who don’t want him working at the BBC, and there’s a petition going around to defend him so I’m re-sharing this review along with a link to the petition – here, and at the end of this post.]

…It might, in a way. Perhaps in the same way that Terry Pratchett reckoned that snow – or was it magic – or both – smelled like the taste of cold iron. A Japanese friend once gave me a tea-flavoured boiled sweet. It was like a delicately green Spangle, and yes, it tasted like sweet tea, which was a bit odd because I don’t like sweet tea but I like sweet sweets, so I liked it.

There – nothing like starting with a good distraction. If you like Chris Packham, or if you’re interested the autist’s view of life, or if you enjoy playing with metaphors and sense impressions, or ways of describing the world, go on, get on and buy a copy. It’s a story that will hold your attention and wring your heart, that will make you slam the brakes on to taste a new phrase or a new way of hearing or seeing or feeling things. And it will remind you of what hell it is, and what joy it is, being a kid.

What is a wasteland?

It’ll come as a real surprise to you, when the teacher turns up near the end of the book feeling sorry for the boy that spent his early years on a crappy bit of wasteland behind the council estate. It’ll offend you, because you’ve got so used to Packham’s view of that bit of ground as an endless sensory festival of a world of adventure, learning and terror. I suppose from an adult’s point of view, it was all rather dangerous and terribly unhygienic.

You’ll learn quite a bit about the experiences of an autistic kid, too. And quite a lot about birds, and ants, and foxes, and human relationships with each other and the world – it also got me thinking about how the experience of childhood has changed during my lifetime. Like most people my age, I worry that kids so rarely get to run wild on bits of waste ground.

One thing that hasn’t changed much, and that struck me painfully hard, was this: I read ‘Fingers in the Sparkle Jar’ during the emergence of the #metoo campaign and it made me think about the childish relationship with animals that Packham illustrates so well. That lad would find and bring home creatures that fascinated him, he would care for them utterly, totally… and usually be the death of them. He would go to the ends of the earth to make them thrive in his care and, once things started going wrong, to make them at least survive – the one thing he never considered was that they might be better off not in his care. And that, to me, is one of the core elements of what creates the tragedies of abusive relationships. Hanging on is natural in a child. The difference between love and possession is something some of us learn, to some extent, when we grow up. 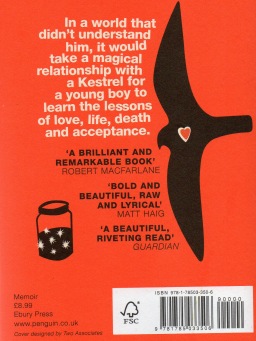 And this is a book that sets you wandering off down all kinds of lines of thought like that – thoughts that help you learn how to love better, how to care more for your environment, how to survive the terrors, and enjoy the wonders, of whatever life has fallen to your lot.

Millions have said ‘free as a bird’. Many have applied enough intelligence to understand the bird’s fear of ‘down here’, a sort of inversion of the human ‘fear of heights’ but, from the crowded depths of our dangerous, ground-level world, Packham presents all these things as though newly discovered. Don’t miss this experience. It will heighten your experience of everything. It might also make you think about how we treat our kids.

Oh, and you can get it from Bookbuster in Queens Road, if you’re in Hastings.

And don’t forget to sign the petition to defend Chris Packham!