No news from anywhere

Remember the days when bookshops did not expect to be held personally responsible for, or assumed to be in agreement with, every line of every book in their shop?

I bought this handy little summary of gender-critical take on the gender debate at a women’s conference. There are so many wildly complicated texts on this, it’s a god-send to have something to hand that a curious person can read in 20 minutes, and it really does cover it pretty well.

But then this piece of paper fell out. 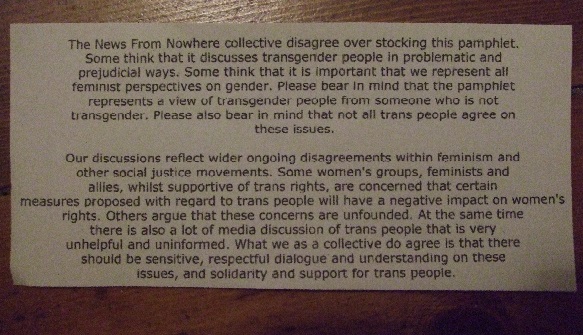 At first, I assumed it was an erratum slip but it’s not – it’s a statement from the bookseller, explaining that not all their people agreed with stocking this book. Well, I suppose you can have a one-idea bookshop. You see them near churches and cathedrals sometimes. And you can have special interest bookshops. Bookmarks (the socialist bookshop) in London is one of my favourites – but the thing is, Bookmarks don’t claim to agree with every premise of every book in their shop. They get the concept of debate, they get the fact that people need to see all sides. 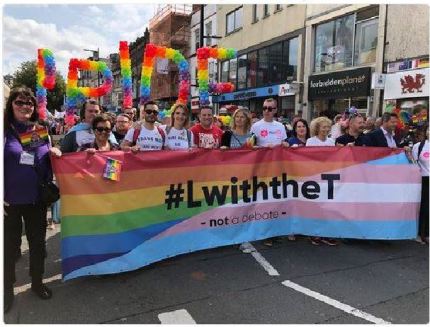 And the worst thing about this piece of paper is that it does not only seek to distance itself from the content of this book – it makes a statement that ‘some’ of the shop’s people feel it’s important to represent all feminist perspectives on gender – which tells us that the shop has ‘no debaters’ among its staff.

It also asks the reader to bear in mind that ‘the pamphlet represents a view of transgender people from someone who is not transgender’ – which tells us that ‘some’ of the shop’s people are treating the gender debate as ‘gay lib two’, and applying the same rules. (I’ll come back to that in a bit).

In fact, many women are suffering. Worse, many kids are suffering, and their parents are worrying themselves stupid as a result. Possibly worse in the long run, democracy and freedom of speech are suffering.

Is ‘transphobia’ a thing? I should imagine so – there are very few things in life that someone somewhere hasn’t managed to be neurotic about – but the fact that #nodebate has been doing so well on twitter suggests there are people out there who think any debate is ‘transphobia’. That is a result of the way Stonewall and other organisations have framed the ‘self id’ campaign as ‘gay lib two’. The suggestion is that any doubts women have, or concerns they express, are equivalent to the objections the religious right and social conservatives made to gay rights and single-sex marriage (ie, they thought the whole idea ‘weird’ and ‘immoral’). Ironically, the transcripts of the original GRC debate in Hansard show that some MPs were thinking precisely that way when they agreed the original legislation to recognise ‘sex changes’ – far from being progressive or empathetic, they were supporting the idea and building ‘privacy’ around it, because they thought those who would make use of it would be secretive (because being gay is weird) and the MPs thought the provision would be used by gay people for whom a sex-change would be a less immoral option than same-sex marriage. 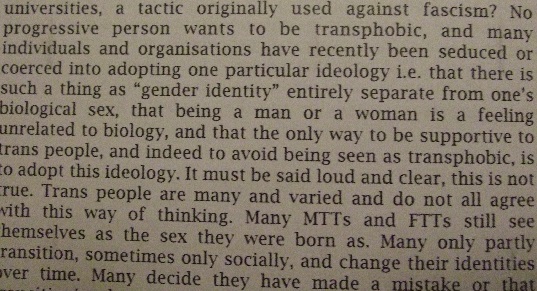 Those unsavory MPs were asked to consider the dangers – such as what might happen in women’s prisons (stories such as the Karen White incident in the press are presumably the ‘unhelpful’ media attention we are asked to consider now). The answer to that problem, those MPs suggested, was that the GRC legislation ‘would only apply to a very small group of people’. Well, I guess it did – around 5000 to date. What harm could it possibly do to vulnerable women who find themselves locked up with male-bodied sex-offenders?

I saw someone pull up a conversation with the best of intentions a couple of weeks back. She pointed out that the conversation consisted of women talking about M to F transpeople, none of whom were present. ‘Nothing about us without us’ she quoted. Admirable sentiment, and if it was said in a discussion about gay and lesbian people, or ethnic minority groups, or asylum seekers, or the disabled – just about anyone else really – I would agree. But this is not gay lib two. A couple of men, or a couple of women, attracted to each other and wanting a relationship – or just a bit of sexy fun – are not affecting anyone else, so it’s no-one else’s business what they get up to together. We’ve all got the hang of that now, haven’t we? MPs wouldn’t get away with talking about same-sex marriage as immoral these days, would they? Or discussing any minority group without giving that group a voice in the debate, would they?

But in the case of the self-id campaign, what (some) trans people want to do *does* affect others. There is a direct clash between the way the Equalities Act exemptions for ‘gender reassignment’ and ‘sex’ are currently being applied. And writing ‘gender identity’ and ‘self id’ into law would compound the problem. Like many other women I guess, when I learned of this situation, I looked for opportunities to talk to transsexual people, and I found that those who believed in the concept of innate gender-identity were taking the ‘no debate’ line. Those who didn’t, said yes, they were worried too – transsexual people have the legal right to be treated as the sex they have identified with and (surprise!) when transsexual women make use of women’s services and facilities, they don’t want to find themselves in the presence of male-bodied predators – that is the danger self-id poses. 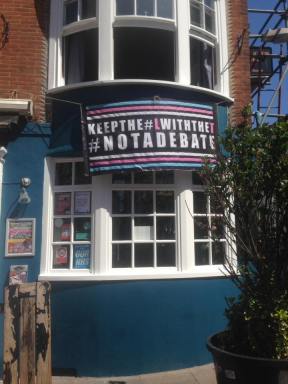 So – because of the danger to women, including transsexual women, this issue needs to be understood, and to be understood, it must be discussed. If you know any transsexual people do, of course, include them in your discussions. The trouble is, they are actually quite rare. If every group of women gathering to discuss this, in every café and living room in every town in the country, is to include a transsexual woman, my, those trans sisters are going to be very busy, and very tired of this topic.

It’s not so easy though, to talk with transgender people – by which I mean those who believe they don’t need hormones or surgery; the things transsexual people think make them transsexual are, to transgender people, ‘optional extras’ because this innate ‘gender identity’ they talk about gives them the right to be treated as female – ‘transwomen are women’ – trouble is, they are usually the no-debaters; another option is to talk to the parents and youngsters who have been caught up in the ‘transgender trend’. Doing so very quickly gives the lie to that original view of MPs that ‘we are dealing with a very small group of people’.

And that last option, I believe, is the generator of that extraordinary piece of paper tucked into that book. What if you have a young person who’s been persuaded that they ‘really are’ the opposite sex, or a parent who’s been terrified by the Mermaids line ‘would you rather have a live daughter or a dead son’ – a line Mermaids constantly back up with Stonewall’s extremely questionable suicide stats … you will soon see that that youngster, and that harassed parent, are desperate for you to buy the ‘trans women are women’ line and the ‘no debate’ line. You may well feel so sorry for them that you no longer want to discuss the affect proposed law-changes will have on women. More likely, you’ll still be concerned but won’t be able to figure out how to have that debate.

And therein lies the problem. That is precisely what the self-id campaigners are after – to persuade you that you have no right to debate, that you are ‘denying their existence’, or causing self-harm and suicide by questioning their beliefs. Trouble is, as any psychologist would have told you until a year or two ago when this campaign of emotional blackmail got going, questioning your beliefs is healthy and necessary. If you are already struggling, as many young people are in the highly-sexed, highly-stressful world they are growing up in, questioning your beliefs is what sees you through the mind-bending morass of agenda-packed information that flies at everyone.

We have to talk

For the sake of those transsexuals who fear self-id for the same reason many women do; for the sake of the kids who’ve been told their ‘gender identity’ runs from Barbie on the one hand to ‘GI Joe’ on the other and they may have to change their body to match it; for the sake of the parents who fear their children have taken a dangerous road, and for the sake of all those women who are put at risk – far more than was the case when that MP said ‘we’re only dealing with a very small group of people’, for all those vulnerable people, please find your courage and start talking.

Nothing about us without us

That good old guideline also applies to women and men – all of us. We ALL have an interest in Equalities Law, and how it’s applied but the government, advised by Stonewall, like many other organisations, has been changing how they apply that law without talking to us. 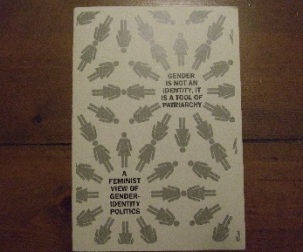 Please find a copy of this clear and informative booklet* and something from Stonewall or Mermaids that puts the opposite case – get your head round the issues, and start talking. Begin with friends and family. Once you’ve got a few people around you who understand why we need to talk, it gets easier. Then, you can take the talk out where it needs to be – let’s make it a national conversation, so that if and when the law is changed we all know, and our MPs know, that the needs and interests of everyone are being taken into account.

Trouble is, to do that, we all need a good variety of information to consider – and for that, we need bookshops with the courage to stand by our right to be informed.

*or read it online here Gender is not an identity, it is a tool of the patriarchy: a feminist view of gender-identity politics

You might also like to have a look at some of the comments on this petition to Stonewall, to see why people are unhappy with the gender-identity stance, and just who it is that’s unhappy.