(If you’re looking at this for the 2nd time, please scroll down to the bit about the election results at the bottom). They never learn, do they? The one sure result of attempts to censor anything is to amplify it across the world. That amazing clip of Amber Rudd instructing the chair at the Rye hustings to silence another candidate was seen everywhere from Craig Murray’s Edinburgh-based blog to the Daily Mirror website.

You might say she’s the Home Secretary, protecting national security – I daresay that’s what the anxious-vicar-emergency-stand-in vicar thought – but she isn’t – parliament has been dissolved and she’s just a candidate, like everyone else. And the fellow candidate she silenced wasn’t speaking dark secrets – it’s commonly stated that Saudi Arabia is a dark and dangerous element in international conflicts, many people understand that the Saudis promote the Wahhabi tradition (I’m not an expert on religions but the impression I get is that Wahhabi activism is the single largest reason a lot of people think Islam is a violent religion. They are the equivalent of the foaming-at-the-mouth, gun-toting fundamentalists who claim to speak for god in the Christian world). Wahhabis appear to be the backbone of IS, they appear to be supported by Saudi Arabia and in their turn, they support IS. They are the reason many people are unhappy with THE WELL KNOWN FACT that Theresa May and her colleagues are doing weapons deals with Saudi Arabia. No secret.

So who is Nick Wilson, and why is Amber Rudd so scared of him? He’s not a politician. He was a banker, he worked for HSBC, and was one of the whistleblowers who have helped so much in recent years to make sure our government and banking systems actually have very few dirty secrets any more. He lost his career, and went through a lot of bullying and censorship, so we should thank him for standing in Hastings and Rye to help call the likes of Amber Rudd to account.

If you’re going to any political events in these last few days of the campaign (there’s a hustings in Hastings tonight) please hear him out, cheer him on, and if you get a chance, go thank him afterwards for his efforts.

Thank him, I’d say, but don’t vote for him. He knows, you know and I know that Hastings and Rye is going to be a close call between Labour and the Tories and if you want to get the Tories out (most people do!) you need to take the Progressive Alliance’s advice in Hastings and Rye, and vote Labour.

Whatever your normal preferences are, whatever you think of the various parties and candidates at the moment, raise your hat to whistleblowers everywhere. They are heroes. Respect to Nick Wilson, he’s a great guy but remember, if we split the vote, we’ll let the Tories back in and Nick will have to spend another 5 years being mistreated by the DWP.

A note on terrorism from Evolve Politics http://evolvepolitics.com/data-terrorism-always-goes-tories-national-security-threat/

If you find yourself cursing Nick when you see the election results for Hastings and Rye, after the extraordinary efforts of over 2000 people in the constituency, working their socks off to bring the truth to people only recently interested in politics… if you’re cursing Nick, I can’t stop you. I can only say that you should consider this: there were two Nicks in this election. One had a specific and important job to do – he did it, he cast doubts in at least some Tory minds, and he carried that now famous film showing how desperate Rudd is to keep our minds off corruption to OVER THREE MILLION PEOPLE. The other Nick had a party that was targeting Labour members in the constituency during the campaign, but at the Hastings hustings, dashed eagerly onto the stage to cuddle the Tory candidate. 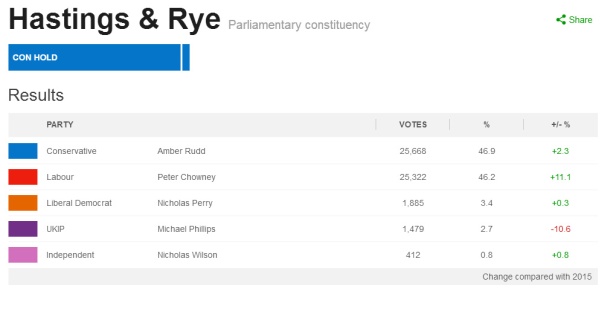 Whatever caused us to lose by a few hundred votes, please look at the tremendous gain that our Corbyn-supporting, democratic socialist Labour candidate has made, taking THOUSANDS of votes off Rudd, and keep your peace with the weary whistle-blower. The future looks brighter, and it’s just possible that Nick Wilson contributed to that fact.

4 thoughts on “About the Censorship at Rye Hustings ***updated***”