I don’t follow sport closely but from my viewpoint the main role of a manager seems to be that of scapegoat. Player falls over own feet and his team loses? SACK THE MANAGER! Team have a bad run and fail to work together? SACK THE MANAGER! Team put in remarkable hours training and come out ten times as good? MANAGER’S A GENIUS (until next week).

The Tories have been shown up for what they are time after appalling time. What exactly are they now seeking to blame on Theresa May…? The fact that IDS’s resignation, when the state of the DWP got beyond him, didn’t stop the regime of punish-the-vulnerable in its shameless tracks? Tory ministers attacking doctors and nurses, teachers and police officers to hide their own failings? The Tory Leave campaign attacking everything we hold dear? Boris Johnson, who was at the head of the EU referendum porkie sellers, running from the press when his leavers won it? What about Cameron, calling the referendum for his own political reasons, then running from office when his ‘team’ lost it? Was that May’s fault? They picked her as the best available candidate from their ranks for PM, and turned on her quite viciously when she failed to save them with a decent election campaign. So it’s all Theresa May’s fault. 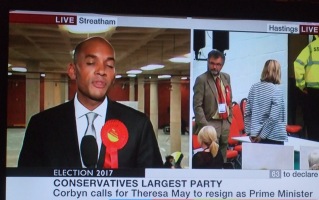 Meanwhile, Labour go in the opposite direction. There was a fair bit of bad grace – Tom Watson had the gaul to blame the BBC for talking down his (newly popular according to the BBC) party leader, conveniently forgetting some of his own actions of recent months, whilst Chukka Umunna claimed he didn’t support Corbyn before because the EU Remain campaign failed… How much effort did Umunna and his colleagues put in, next to Corbyn’s huge and intelligent Remain campaign tour? But whilst he and his colleagues were eager to blame Corbyn for their failings last year, now Corbyn has got them some good election figures (ie, he built the Labour vote at the head of a huge army of new voters and returners to Labour). As far as I can see, all Corbyn’s allies in Westminster have returned a larger number of votes for Corbyn so, other than Watson and Umunna, a commendable parade of Labour figures now declare support for their leader, one or two even apologising for their former doubts (ie their readiness to sabotage their leader at the least set-back to themselves). 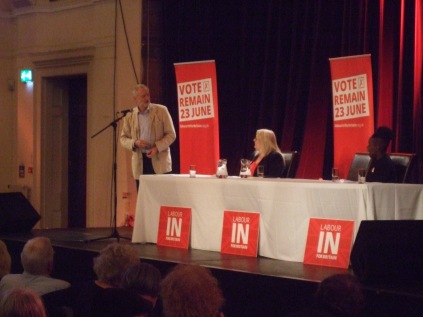 It’ll be interesting to see what those who deserted Corbyn over the ‘Article 50’ situation have to say now. Corbyn’s referendum campaign was popular with those who went to rallies, but not with politicians, because he trusted our intelligence and discussed the pros and cons of the EU. We learned more about the EU in a few weeks than most people had in a lifetime of lousy media reports and sound-bite political claims. Corbyn demonstrated that the EU had faults, and told us why he thought it would be sensible to stay put and try to reform it, and didn’t try to scare us with instant death if we left. He gave us, the people, a decision to make that was worth thinking about properly.

Once Brexit was in progress, Corbyn supported Article 50 in parliament, thus keeping faith with the people’s decision, forcing May to show her (empty) hand and ultimately precipitating an election which has given us a buffer against an inept Tory Brexit by bringing a broader range of voices into Westminster to discuss how the deal should be done, and how the government should react to it. 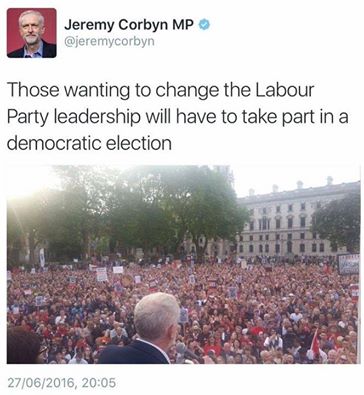 And if you look at that strategy, and the horror it inspired in many politicians, you can see precisely what has changed. Corbyn responds to the electorate in a way that asks them to think and take part, and so we do. The Tory campaign was expensive, and largely funded by the few millionaire business people who gain from Tory administrations – that situation has become more extreme, but is nothing new. The Labour campaign was funded by vast numbers of small donations and run by a huge and varied team of volunteers. There are always non-government organisations involved in elections, but the organisations that supported Labour in this election were huge, people-powered ones like the People’s Assembly Against Austerity and the Progressive Alliance. 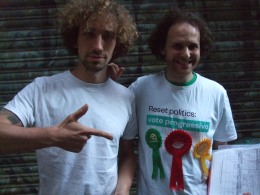 What is new is that an ever-larger proportion of the people in the UK have woken up and decided they want a voice. The remaining Tory vote (other than the millionaires and billionaires who benefit) is the shrinking numbers of those who prefer swallowing what their televisions and newspapers tell them to asking questions and doing their own thinking.

In my home town of Hastings (constituency Hastings and Rye) there were two likely winners – the Home Secretary Amber Rudd, with her parroting of the Tory party line and her clever sound-bite presentations (Tories ‘keep us safe’ versus Labour’s ‘magic money tree’, usually) and Peter Chowney, who has served on our council for two decades, has been seen to fail at some things, succeed at others, but always been ready to discuss and adapt to what he discovers. 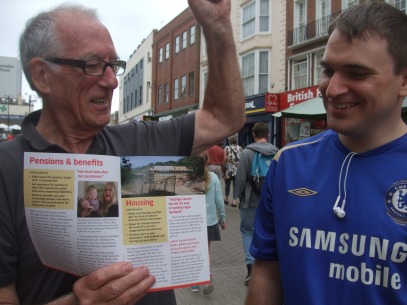 Chowney took Rudd’s majority of 5000 down to one of 300 (probably – it took three recounts). He did it in a relaxed way. He spent the campaign time out and about discussing issues with anyone who approached him. He wrote his own manifesto for Hastings and Rye and presented it with honesty, and with enthusiastic acceptance of help and ideas from local members and supporters, from the Green Party, from the Progressive Alliance – from anyone who wanted to join in and talk sensibly about possibilities for Hastings and Rye. Ten years ago, a campaign like that wouldn’t have worked. 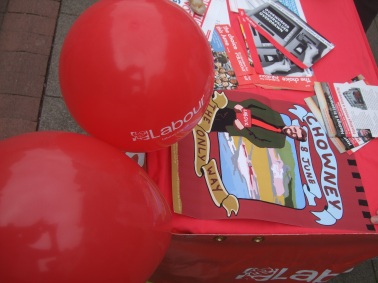 It looks as though the era of trying to play a combined game of ‘follow my leader’ and ‘blind man’s buff’ is over. Politics is at long last growing up. Amber Rudd ran her campaign in Hastings trusting that people would swallow the ideas she spun that the Labour council was to blame for cuts and closures forced by her government’s grant cuts, and framed her acceptance speech after her narrow win rather as though she was claiming credit for the magnificent regeneration Hastings has experienced under Labour council management, and to a great extent instigated by Gordon Brown’s ideas, back in the days when local regeneration actually got government funding.

Tricks like that are going to be increasingly difficult for her to pull off with a majority of a mere 300, in a town that is really waking up and paying attention.