Brexit debates for the old, the sick and the poor

We are in a state of denial about what happens to us when we get old, or sick, or poor. In the case of the elderly, this has been our silent shame for decades.

When I was young, back in the pre-Thatcher days, there were council old folks homes, which paid entirely for care if people had no money, and didn’t charge astronomically high fees to those who did have money. We merely felt guilty when we were unable to care for our elderly relatives ourselves, and had to make use of the homes – or we felt guilty because we didn’t go visit them as often as we should. Now, we feel guilty because we are leaving them to the appallingly bad fate of struggling alone, with random by-the-hour “carers” dropping in and whizzing round doing the minimum a couple of times a day. We feel guilty, even though we are leaving them because we’re so busy struggling to survive ourselves.

When I was young, every town had night-shelters and hostels for those who were homeless, lost and alone. They were basic, but they were there – and social services were there, with staff available to help people find their way out of troubled times.  There were waiting lists for council homes, but there were homes at the end of the wait. Now, every time we leave our own homes (those of us who still have them) we walk past people who have hit rock bottom, and along our daily way, we constantly have to decide if we can help this one or that one, if we should give our money to this or that beggar, and what right we have to do what we do to survive if we don’t give it. 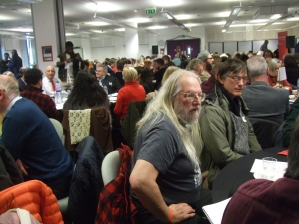 And now, we have added worry about refugees and immigrants to the background worry. Where do they come from, why do they end up in detention centres that look like prisons? How much of their plight is our fault, and what should we be doing about it? Who is running those detention centres, and what is going on there?

Imagine being old, or sick, or poor, and being a refugee in a strange country.

Imagine how much better we would all feel – everyone – if we had a government that was really putting an end to that those miseries. A Jeremy Corbyn government will make finding homes for everyone its first priority. That government would restore the national health service, and social care services. It would put an end to the profiteering projects that are constantly thinning out and draining the services that once made Britain special and, because it would not be a government led by the party that instigated the referendum and triggered Article 50, all the EU negotiation options would be back on the table.

It’s easy to forget all that, in the mind-shattering clamour of anxieties over Brexit. When Jeremy Corbyn came to Hastings this time, he reminded us that we aren’t a country of Leavers or Remainers. We are a country of people who’ve been blinded by the rubbish touted by both Leave and Remain campaign companies. We are divided by a near 50-50 vote in a referendum that should never have happened. If we ran another referendum, we would still be divided near 50-50, but newly fuelled by the fury of the campaign. Who wants fury and chaos? Fury and chaos are very helpful to saboteurs. The perfect distraction is the distraction created by the saboteur’s victims themselves, so they don’t have the time or the energy to try and stop the sabotage.

Don’t be distracted. Labour MPs have a resolution from Labour conference to guide them, to make the best job they can as the party of opposition, of stopping the Tories wrecking everything. They should stick to it, and we should think about that constant background worry about getting old, or sick, or poor. It was there before we joined the EU, it’s been there all along and it’s getting steadily worse. Let’s solve that first, because we can.

Speak up for the old, the sick and the poor. Take a break from rising to the endless rows over Leave or Remain, or whatever political battle you’re currently caught up in, and join the push for a general election, so that we can make all our people safe, then we’ll have a government that will be trying to solve the rest of it for you, for me, for everyone. Because we will all get old and many of us are, or will be, sick, or poor before the end.

Jeremy Corbyn on Leavers and Remainers – please share this video anywhere people are falling out over any of those political divides people fall out over.