Do you wonder why there is so much bile in politics recently? Why rich business people, most of the Tory Party, and those on the affluent right of all the other parties are engaged in such a vicious battle to stop you understanding the new economics?

When Labour is in government, they plan to take a little bit more tax from those earning over £80k per year, and they plan to move corporation tax back to the figure it was before multinational corporations ruled the world and fed huge tax-breaks to the richest people and organisations. That doesn’t sound terribly scary, does it?

It’s only a little bit of money to the billionaires, it’s a price they managed to pay under previous governments, so why are they so desperate? They can afford it, easily. But they are desperate, and losing ground fast. Just look at our Prime Minister spinning smoke and mirrors to try and hide an idea she can’t honestly criticise… 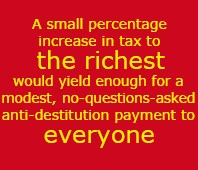 What exactly is happening here? She’s talking about Basic Income – the idea that the government should make a non-means tested, regular payment to everyone, to ensure an end to crisis-destitution and absolute poverty. To prevent people losing their homes, when they have a single month with no other income.  It would be the rich paying for it, people who are so rich that small percentage tax-rise would not hurt them – so whether you’re a fan of Basic Income or not, it’s worth thinking about why it is such a problem to them that they feel compelled to try and shoot the idea down.

To do so, you need to understand just how rich the organisations funding Conservative politics and right-wing Labour politics are. Please bear in mind that while most of our people fall into poverty and despair, the UK is accumulating billionaires.

What is a billionaire?

One million pounds is enough to keep you safe for life unless you do something stupid, and one billion is one THOUSAND million. Yes, we have people who are sitting on ONE THOUSAND TIMES the amount of money they need to stay safe for life – and they know what will happen if people realise what that means but rather than agreeing to go for a little bit more equality, those richest of people have taken THREE TRILLION pounds out of our

country so far this year, in an attempt to stay stupidly rich. They are why our economy no longer works.

Once you understand that, you’ll see that there is no need to take more tax from ordinary people.  A little bit of money taken from the richest is a huge amount of money to the rest of us – it is easily enough to ensure an end to absolute poverty, by means of an idea like Basic Income.

They can afford it, but they are desperate to make you think it’s too expensive, that you will have to pay for it, or that nasty people will be getting money for nothing. It’s not the small loss of money that worries them – it’s the idea that fairness might catch on. Taking a little money from the rich to put an end to potentially fatal disasters for the poor and the vulnerable is so logical when you think about it – that is just what they don’t want you to understand.

Once you start thinking about fairness, you will realise how unfair our politics and economics has been for the last 30 years – and if you look into it, you will find just how much money has been taken out of your pocket, taken by the higher energy and water bills private utility companies have set, taken by the wage-freezes companies have used to fund bonuses for the bosses, taken by the granting of ever more rights to landlords and letting agencies, until no-one feels secure in their own homes, taken by the huge gaps in benefits paid to people trying to apply for Universal Credit. And when you realise how much has been taken, and why your life is harder than it used to be, harder than you once thought it would be, then you might just get very angry, and want all the money back, not just the relatively small amount necessary to right things through a Basic Income scheme. That is what Theresa May is really frightened of.

But that’s not all. There is a deeper reason why the rich are desperate to stop us learning just what they have taken, or learning to be fair and logical. We all hate it when we see the homeless sleeping on our streets, we hate it when we hear of families splitting up, falling into the acrimony and chaos and mental health problems caused by the stress of long-term poverty.

Rich people know that, but they don’t want to see that the huge increase in poverty and homelessness is something they could afford to fix with the same speed and efficiency with which they found the money to save Notre Dame. But above all, they don’t want us to realise that. They don’t want to face the fact that our shortage, our daily struggle, is their choice, that they care more about something like Notre Dame than they do about people who have been pushed into poverty, disorder and crisis… and they fear that we know it already.

It does sound odd at first hearing, to give £100 per week to absolutely everyone, even the rich. And if you’re not a billionaire, it also sounds impossibly expensive. Theresa May and her funders are really desperate for you to keep thinking that way because otherwise, you will begin to understand that in a chaotic and unfair world, a world jam packed with deceit and disorder, Basic Income really is the quickest way to get real money back into areas that have been starved of funds for years. It’s the quickest and most efficient way to ensure an end to child poverty, an end to destitution and an end to the misery of those who’ve been working every waking hour, and still aren’t making enough to keep their households together.

More from me about Basic Income here but…

Before you go, it’s worth looking again at Theresa May’s smoke-and-mirrors attack on the idea of Basic Income. Think about how it displays the seeds of destruction of the old economics. Notice that her argument only works (in as much as it works at all) by acknowledging that we already know the hedge-fund manager is the enemy.

She depends on you already being so eager to stop the enemy getting their hands on any more money. She depends on spinning so fast that you don’t notice it is precisely that hedge-fund manager who is so rich that his ‘little bit more tax’ will be greater than the £100 a week he – and everyone else – would get from Basic Income, so if we chose Basic Income as a cure, we wouldn’t be ‘paying the rich’ at all.

In contrast, you and I are nowhere near rich enough to qualify to pay more in tax than what we’d receive if everyone was getting Basic Income. I say this because super-rich people are very rare, therefore the vast majority of people reading this won’t be – but if you are one of the super-rich – don’t worry. That little bit more tax really is a mere drop in the ocean to you. If we adopt New Economics policies such as Basic Income, you’ll lose a tiny fraction of your wealth, and you wont have to feel guilty any more because the little bit you’ll lose will be the First Aid that will save thousands of lives, which should make you feel better.

If you are one of those people who’s doing alright – not fabulously rich, but comfortable, and you’re wondering why people like you should have an extra £100 a week ‘for nothing’ please consider this – whether it’s ‘for nothing’ or not depends on how you use it. For years, you’ve been paying over the odds for your utilities and services. You are looking forward to a state pension that’s barely enough to feed a cat, if you’re a WASPI, then you know very well that you’ve been conned, and you’ve probably been underpaid for decades.

When you are short of money you don’t spend more than you need to, and in your attempts to economise, you’ve been starving your local shops and businesses of income. You didn’t mean to – you had to. Well, given Basic Income, you could put all those things right by spending that extra £100 per week to make yourself and your family more comfortable and secure, and you’d be giving a bit of trade to local businesses in the process. Don’t be fooled. You deserve it, and your town needs it – we all need it.

Why are the poor worse off?

A Corbyn/McDonnell government will be an exercise in fairness for all. That is why you hardly ever hear any seriously rich people recommending a Corbyn/MacDonnell government, whatever their party, whatever their newspaper or TV show. It’s not that they can’t afford it… It just makes them feel like the bad guys. We need to rescue ourselves and our environment and, to do that, we need to rescue the super-rich from their destructive paranoia. Basic Income is an efficient way to do that.

2 thoughts on “The secret the rich are desperate to keep”