Biased media getting you down? – this is what you need…

It’s so great to be under General Election Campaign rules again. You can forget the garbage in the papers and on telly, go out campaigning and meet real people out there discussing real ideas.

If you need more ideas and information for those discussions, if you’ve been shouting at the telly and snarling at the newspapers and thinking you need a real, people’s national newspaper – it’s out there, waiting for you.

Here it is at the Labour Party Conference Fringe… 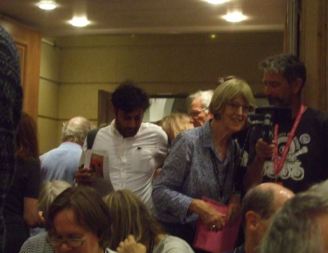 There I was, trying to take photos with my arms pressed against my sides. (well that’s my excuse for the smudgy, snatchy photos!) This was the most tightly packed fringe event I went to at Labour Party conference in Brighton, back in September.

Back then, the mainstream newspapers and TV stations had already set off on a trajectory speeding away from the Labour Party we, the membership, knew. The daily fiction-and-smears marathon was getting into gear, and perhaps that’s why it seemed as though just about every delegate at conference wanted to come and talk about how we were going to get our message out in a world primed to hear nothing but bad news about socialism.

Who do you think ran the very popular fringe event? 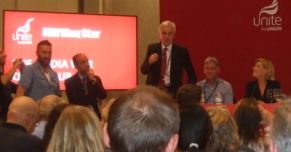 We heard from a range of speakers who’d had to learn how to cope with media smears and harrying over the years. Diane Abbott, the first ever black woman to take a seat in the House of Commons, who has had to find her voice despite everything from the condescending tone of the old broadsheet papers through the blatant nonsense of a gutter press infused with racism, sexism and classism, to the out-and-out disgusting, violent nonsense generated by modern social media. 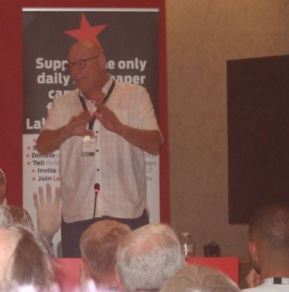 We heard from John McDonnell who told of journalists turning up at a house owned by relatives of his in Europe, sniffing around and questioning, wanting to know whether John had a stake in a property abroad (he didn’t), and then sniffing around where he lives, whipping up antagonisms about immigration and racism that he reckoned had barely existed in his local community before they set to work.

John’s advice was to get yourself well informed, to practice getting your message across accurately and positively, and to keep on doing it, no matter what they throw at you. 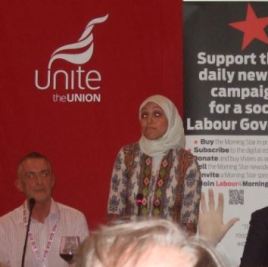 We heard from journalists, activists and trade unionists, over and over, about the importance of endlessly pushing the positives and the basics of your own message, resisting the pressure to spend your whole time on rebuttals of what should be obvious nonsense.

This marvelous fringe event was called The Media War on Labour and How to Defeat It. It was run by

It all feels so long ago now but here we are now, in an election campaign, which will drag the media (temporarily) a little bit nearer to reality but, if you want to be accurate and positive in your campaign message, you need better news than corporate papers and government-dominated TV will ever give you. If you want to understand properly what’s going on on the left day by day, if you want to be properly informed so you can argue a positive case for a socialist Labour Party, you need

We remember it exists when we’re at conference, don’t we, because there are free copies around but in between conferences, too many people forget it’s there. 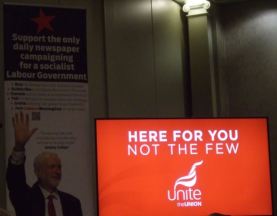 Owned by the people, run by the people, for the people – if ever there was a newspaper #BytheMany #FortheMany, this is it. You may not agree with every word in it (I don’t) but every newspaper has its own angles and preferences and the Morning Star is far and away the best and most honest paper (in my opinion) for a socialist on the campaign trail.

You can read it online

You can buy shares and join in

Or you can get it from your news agent – if they don’t stock it, ask them to order it for you – ask for one for every day of the General Election Campaign. It will help you follow John McDonnell’s advice, and get out there talking positive socialism.