They got the money, they got the corporate media – but we got The Many!

It’s easy to get despondent, plodding through the days in Austerity Britain, with the press and the TV constantly telling you you’re squashed, there’s no decent alternative to the grind of poverty, war and housing insecurity – but when the people-powered Labour Roots tour comes to town, everything changes. It doesn’t feel like campaign organising – it feels like a celebration, a party – and everybody comes, and everybody finds they have a job to do – a job they want to do, in transforming our country.

There are workshops on policies, on using social media, on campaign skills, there are stalls run by local community-oriented charities and businesses, and by Trades Unions. There’s talk, there’s laughter, there’s music – and of course, the big speeches.

We had Cllr Maya Evans, our council climate champion, we had Rosanna Leal, instigator of the Hastings Refugees Buddy Project; we had socialist activist and performance poet Penny Pepper, and we had young people from the schools climate strike. 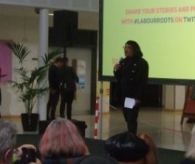 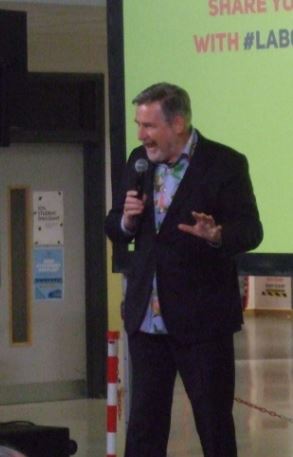 Diane Abbott told us how the Home Office will be transformed under a Labour Government – it will be goodbye to the Hostile Environment, the hated refugee detention centres will be closed, and our police will once more be running at full strength –  because under the Tories – the so-called party of law and order, the decline in our services and policing has led to a huge increase in violent crime and injustice.

Barry Gardner told us about the Labour Green New Deal – and explained how transformational that will be for Hastings, when the  money gained from planned wind farms will be used to re-energise declining coastal towns in more ways than one.

And Jeremy Corbyn rounded off the evening, talking about the true ending of austerity, which will come when we win the next election and bring in a genuinely transformational Labour government.

But Labour Roots isn’t primarily about the big speeches, it’s about The Many – it’s about changing the mood, it’s about coming together, firing up, and understanding that it’s us who are going to do this thing – at the end of Hastings Labour Roots event, everyone was invited to sign up for By The Many, and join the people-powered campaign, and indeed, many did so. General Election, here we come!