That’s the kind of question 21st century feminists should be asking, is it?

What happened? Some women in Oxford set about organising a 50-years-on commemorative Women’s Liberation event. Trouble is, there’s a bit of a split in feminism going on. (Go search ‘third wave’ and ‘fourth wave’ to find out more). 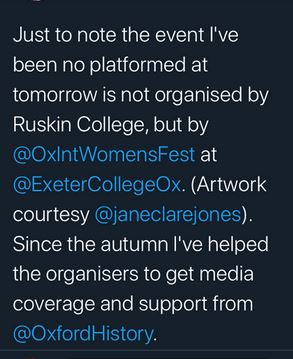 The speakers they’d lined up included Selina Todd, who has recently given a talk at Women’s Place UK. Apparently, two other speakers said they wouldn’t speak if she did.

A comment heard from one of the organisers was “who should we give in to?” Well, let us try to answer that:

The options there would be to no-platform Todd, or to tell the other speakers that conferences tend to include more than one opinion and that they should be ready to be disagreed with. 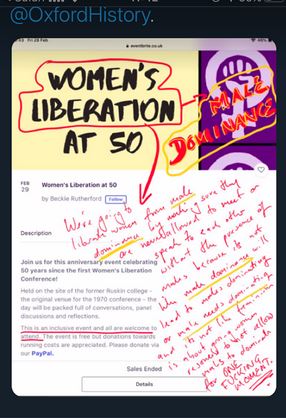 It seems pretty obvious to me that option one is repressive, whereas option two leaves all three women the opportunity to have their say – therefore a force for liberation should go for option two.

But, according to a comment by one of the organisers, they had been threatened with disruption if they allowed Todd to speak. They are clearly very averse to disruption, as they asked Todd to no-platform herself, so they didn’t get the flack for so doing.

The nature of liberation

I do hope not because if they are, I suggest that no kind of liberation is going on.

Click here to read the ten minute talk Selina Todd didn’t get a chance to present.

The question most admirably answered…

Meanwhile Dr Jane Clare Jones was at full steam over on Twitter.