On 29th November, The Daily Mirror carried a front page that told us what Johnson thinks of us but…

…for some reason it got left out of the BBC’s round up of the newspapers the night before. Here’s the story from Skwawkbox – do share it, but there’s something we need to consider, so please read on…

If you went into your local store, you wouldn’t have seen that impressive first page, because the Daily Mirror decided that day was a good day to have a wraparound ad obscuring their front cover.

I asked all my contacts to get down to their local shops, have a rummage on the news-stands and leave Mr Johnson EXPOSED. 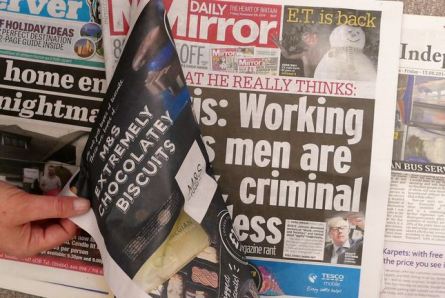 But what did we learn? Of the big, national dailies, the Mirror always seems to be the one closest to being “on our side”, and that front page certainly fitted the mood on the left, that day outrage was ballooning at Mr Johnson’s oscillation between no-shows and bumbling, foot-in-mouth appearances.

So should one read anything into the fact that the Mirror had that shroud obscuring its anti-Johnson cover, that day?

A corporate newspaper will never be on your side

Corporations are, by their very nature, on the side of profit – nothing else. It wasn’t always entirely true. I’m sure many historians would say it wasn’t true in the days of the great Victorian engineers, when corporations were set up by people with great visions to build bridges and goodness knows what else.

But that was then. The newspapers don’t report “news” as such. They choose their readership and report what they think their readers would like to see. Bit of a problem for a newspaper that chooses a slightly left-of-centre readership, if that readership clearly wants something the newspapers’ owners probably don’t want spread *too* far.

Hey – here’s a great idea! Give our slightly-lefty readers a stunning, anti-Boris cover, then cover the cover with a nice advert (which we’ll get paid for) so Boris-voters (who wouldn’t read the Daily Mirror) won’t see it!

So if you want a newspaper that actually IS on the side of the people, try the Morning Star, just about the only national daily that isn’t owned by billionaire tax-avoiders.

Or just take a break, and listen to some music…