The situation in our schools had a huge impact on the last General Election so the School Cuts campaign have been on tour, making sure people know how the land lies in this one.

The team were in Hastings and Rye this weekend, to talk about the concerns of parents and teachers here. One of the big issues in our area is poverty, and all the ways that deprivation impacts on our children. Another is how our schools are faring in the hands of an academy chain. Here is what the School Cuts people had to tell us…

Prime Minister Johnson’s recent announcements about money for schools turns out not to be new money. Worse still, as with the NHS promises, in real terms the current promise nowhere near takes us back to the level we were at ten years ago, nor do government fund allocations take into account rising costs or pupil numbers. In fact, 83% of schools will still be underfunded, even if they receive all the money currently being promised.

In recent years, many school have lost libraries, librarians, teaching assistants, maintenance and repairs money, classroom resources, ESOL and special needs provisions – In all, 147 out of our 150 local authorities will be affected by the latest cuts. Many schools have reported that they will have less money per pupil by 2020.

The increase in poverty and distress in communities across the country means teachers see children coming into school not ready to learn – they are hungry, or not properly dressed and equipped, or suffering from the traumas of families in crisis. One third of the children in this country are now living in poverty, and that means schools and early years support need more funds – in reality, the opposite happens, with the schools in the poorest areas having to cope with the least amount of money per pupil. 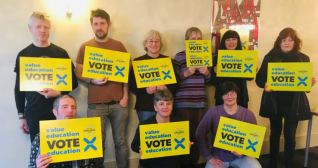 Recent reports also suggest that the poorest areas are most likely to see their schools marked down by OFSTED reports, piling more problems on the heads of already stressed communities.

Child poverty is notoriously common in our constituency. Not just in the estates around the town but in the rural areas and in Rye, and yet our schools are significantly down on pounds-per-pupil in recent years, with classes larger than the national average.

The academies are the worst offenders on this. In fact ARK, the academy chain running most Hastings schools appears to be implementing all the government cuts to schools, whilst generously adding to the number of their execs earning £100k a year – yes, that’s £20k per year more than Mr Question Time! – They also run a streaming system with very little mobility in it, so that kids who are knocked back by hard times are unlikely to be able to fight their way back up the line and reach their potential later on. Our schools need to change.

“School Cuts” are not a party-political organisation, but I am feeling party-political, so here’s a handy chart showing the main parties’ spending plans for schools…

One response to “SCHOOL CUTS COME TO HASTINGS”